We returned to Dali from Tiger Leaping Gorge and decided to go out for one more rock climb before leaving China for Vietnam. So, full of excitement, we set off the next morning in perfect sunshine with the opportunity of a glorious day’s climb, not expecting any of the little disasters that awaited us.

Before leaving the main township, we required a diversion from our destination; stopping for a brief moment to pick up a package. After a five minute wait, we all dived back into the car, put on our seat belts, and waited eagerly as the key turned in the ignition, but … nothing happened … The car’s battery held no charge. 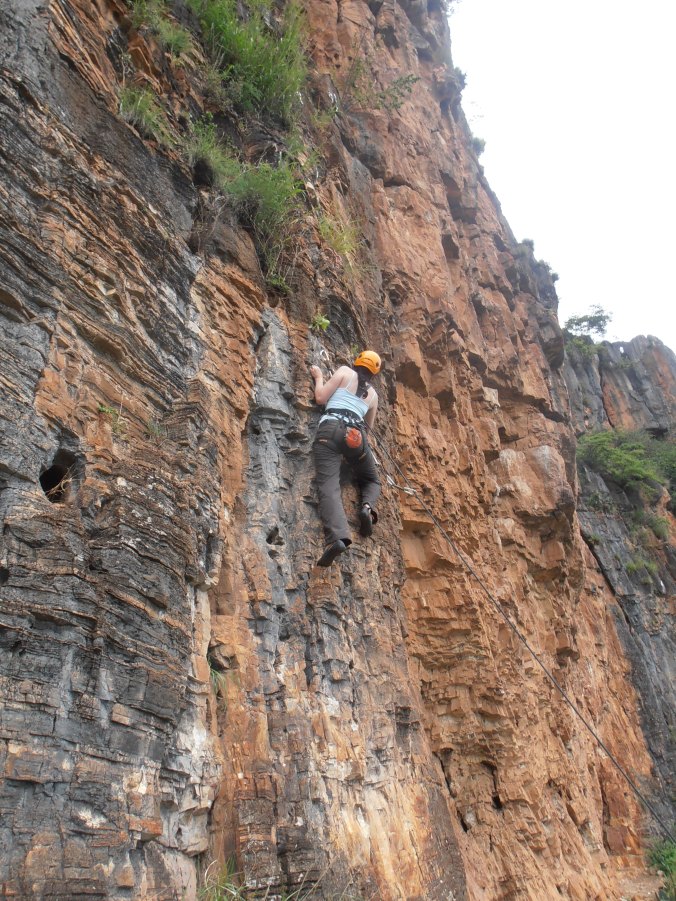 It took a further hour to find jumper leads and someone willing to jump start us and then … after having to turn around at a road block of bogged vehicles and find another route, Adam, the rock climbing guy from the US, gave us the ‘I think you’re cursed look’, followed by a condescending, or perhaps even a fatalistic shake of his head, but to his credit, he continued to the cliff-face anyway. Despite his concerns, we managed many climbs over the course of the day and we both felt good on the rock. We even made the wild bumpy ride back to town without further incident; feeling terrific about our day’s achievements.

Once back in Dali, we continued to discover more of the amazing little lanes and alleys of the old town; streets that would instantly attract a law suit in Australia, seemed quaint and interesting here. We also found a great little German Bakery called Café 88. Katrina the owner, treated us like a pair of old friends, as we indulged in a cheese platter and some very acceptable Italian red wine! We had almost forgotten what a good red tasted like, after a month of abstinence.

The next day, Katie discovered and participated in a one-on-one calligraphy class, run by a master named Ying; one of those rare individuals who radiate love and gentleness, despite communication difficulties. Together they produced a beautiful scroll that we mailed to Australia to adorn our home.

That afternoon we set out to kayak on ‘Er Hai Lake’, although it took more energy to get the heavy Canadian Kayak into the water and back out again through the swamp, than we could muster for a prolonged paddle. Nonetheless, it felt good being out on the water with the local fisherman and the rather large jumping fish that occasionally thudded into the sides of our craft.

That night we headed back out into the alleys to sample the great variety of dumplings and a hot pot indulgence featuring a wide range of local produce. It seemed like a fitting way to say goodbye to charming Dali; one of the lesser known gems of the world and a place we had come to love. We both felt real sadness watching the town, the lake and the mountains recede from our view and having to leave our friends at Sleepy Fish behind, but because of Visa requirements our time in China was almost at an end. Soon we would be heading across the border to Vietnam.