After leaving the sublime village of Dali, we arrived in busy Kunming city at 4.30am, after absolutely no sleep, feeling gravel-eyed, grumpy and with Katie unwell. To make things worse, every taxi that went by ignored us. What a stark contrast to Dali. After finally getting to our hotel and waiting on the reception couch for five long hours, we checked in; moving ever-so-slowly, like a pair of unoiled robots. We spent the next twenty-four hours in our hotel room in recovery mode. It turned out that Kunming had one great positive left to enthral us. The carpet in the lift, displayed the current day of the week in English. Yes … yes … yes. I just can’t envisage how we could have managed without this wonderful service. 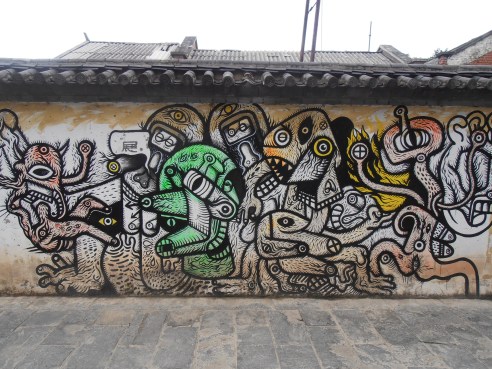 The next day we boarded a bus to the border town of Hekou; glad to be clear of Kunming’s answer to Faulty Towers. As soon as we climbed the steps and took our seat, we met Monique, a journalist from Holland; the only other English speaking person on the bus. It’s amazing how people of all kinds gravitate to a common language and the chance to communicate, so … we quickly became friends. Together we braved a trip brim-full of adventures!

Very early in the journey, we became confronted by an overturned truck, which looked like a dead cow with its legs in the air. The traffic began to backup, so our driver attempted a very precarious U-turn, involving deep gutter drop-offs on each side of the road and at least twenty agonising turns before we faced the opposite direction. We then took a back road to avoid the blockage. The detour road initially seemed quaint … In this I mean narrow, rutted and that ‘airborne’ kind of bumpy. At one point, I think we may have left most of the gear box on a rock in the middle of the road, but the villages and scenery looked picture-postcard and shone out above our little drama.

As we approached the border, the mountains grew in beauty and height, and it seemed impossible that a freeway could exist in such a vertical environment. How could people climb up amongst these crags and create such a network of tunnels and bridges? I remember shaking my head with wonder, when the bus pulled off the freeway into a border guard station. Here my good vibes abruptly ended. The guards looked angry and fierce, so when they demanded passports from all who weren’t Chinese nationals, we quickly handed them over. When it came time to return the passports, Katie’s had somehow disappeared! An angry argument ensued. We pretended to be mightily important and arrogantly offended by their affront, while they continued to sneer and threaten. A few, long, panicky minutes later, a surly looking guard magically retrieved it from his back pocket, thinking it highly amusing. After that a strange silence existed in the bus for many kilometres.

Apart from the sweltering heat and humidity, we enjoyed our brief stay in the colourfully lit city of Hekou; liking the outdoor dumpling shops, while we got to know our gorgeous new friend, Monique, who we nicknamed ‘Duchy’. The next morning, dripping with perspiration, we squelched our way across the border into Vietnam, crossing the bridge over the Red River, through two sets of customs procedures. It seemed tiresome filling in all the forms and being scrutinised either side, although the border control personnel in each case were professional and pleasant. The process took nearly forty-five minutes and all the time I felt excitement at the thought of a new country to experience, yet at the same time, sad at the thought of leaving China and its beautiful people. A month earlier, I entered China, highly influenced by the conditioning of my childhood and a lifetime of prejudice. I left impressed. 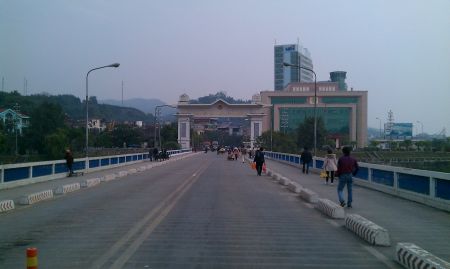